There was no sleeping on those nights. I knew this, but still I tried. Laying on my unfolded futon in my tiny room, I could see the faint glow of the full moon through the wooden slats covered by the blue-tarp roof.

The air thick and hot, it wrapped around me like a fever sheet as I finally got out of bed. I stepped the few feet to the kitchen, careful not to bang my toe on anything in the dark, and looked out my favorite window onto the street one floor below. The willow tree that on a breezy day would reach inside was as still as death, as was everything else I could see. The porchlights on the small homes across the street looked like they were shining through a light gauze, and leaning on my kitchen counter, gently pulling the branches of the willow through my hands & loving the feeling of its life, I knew that it was far too hot for me to sleep. I could either fold up my futon, sit down & write, or…

I looked at the clock. Still around 8 hours until I needed to be out at Jackson Square. I liked being there earlier, but definitely no later than 11am for the lunch crowd walking up & down Decatur. I would stand until the storms came through, nearly every day like clockwork around 2:30 or 3, and use that time to either grab a café au lait and beignet’s at Du Monde, or just sit on my milk crate and rest underneath the balcony of the nearest building, reading, writing, and waiting the hour or so it took for the thunder, lightning & rain to move on.

So much, I love the storms. Many times I would just sit there watching the rain splash into puddles of itself, and feel a charge roll through my body & mind as the lightning flashed & thunder rumbled across the sky, through my body. It felt like I was a part of it, and if I wanted to, if only I knew how, I could simply disappear into its magic & become a part of the storm’s passion, leaving everything behind & off to another new adventure…

Still naked, I put on some clothes & my boots, poured some ice-water into my thermos to bring with me, and stepped outside, locking my door behind me. At the top of the stairs I breathed in, and smelled the fragrant still air of the Southern night. Completely relaxed but eager to feel the wind on my face, I quietly walked down the stairs, unlocked my bike, then walked out the front gate on to Esplanade. I thought a few seconds, then realized – I knew exactly where I was going.

It felt beautiful to be riding through the streets. Everyone was inside & the city was still quiet from everyone leaving because of Katrina, so the streets were mine, & mine alone. In no rush to get where I was going, I swerved back & forth from side to side, sometimes riding up on to the sidewalk for a bit then back into the middle of the street, or randomly riding in extended figure 8’ts, at the top of each “8” moving just a little bit more in the direction I was going. The warm wind on my face felt glorious, and feeling so wonderfully light-hearted, knowing these moments were as perfect as they could possibly be, I wanted this one to last as long as it could.

Crossing through Jackson Square Park then Decatur, I smiled & circled around the spot where I would be standing again in just a few hours, visualizing hundreds of people putting 5’s, 10’s & 20’s into my busking box. I was still saving up for a van to get Raven & I to Burning Man, as I’d promised her a ride a month or so before without having a ticket or any way to get us there at the time, but knowing things would work out. In those days, they always did. In those days, I was magic.

There was no one around, so I didn’t bother locking my bike – just laid it down off the sidewalk on the rocks. There was a soft glow from the moon, but still I was proud of myself that I had thought to bring a flashlight as I stepped from rock to rock, down to the river. Finding a good rock to sit on right on the edge of the Mississippi, I saw the cargo ships downriver, silent, still, & peaceful. I couldn’t help but think of what it was like a hundred years ago, remembering all I could of “Huck Finn”. I guess if I ever had a hero, someone I wanted to emulate, it would, without question, be him – with a good helping of Samuel Clemens thrown in for writing & the Gentleman.
Feeling on my face the slightest whisper of a cool breeze coming off the river the full moon giving just enough to see the ripples in the water moving with the current… and as I sat there savoring this perfect solitude, I felt my heart beating and strong, full with the beauty of this life. 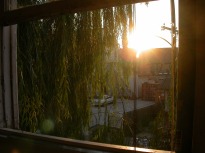 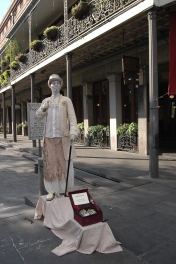 As I weave the rings together, I half-watch various TV series that I remember enjoying, and this time, it’s Treme – a show based in New Orleans, centered around the music of the city – and the pain & frustration that Katrina left in her aftermath.
The first show of the series begins three months after The Storm – one month before I moved there, and the first time I ever stepped foot on the magick of its soil.
I find tears coming to my eyes frequently, as I remember the amazing people, the fun & friends I met that remain in my heart to this day, and the spirit of the city.
I had never experienced a city stronger, with more resolve, nor people with more love for their home.
Until I moved there, I had never truly understood what that word meant – only that I had never had one. I chose to call it mine shortly after I moved there, and in a strange and not so subtle way, I could *feel* that it accepted me into its arms. It loved me back.

I performed on the street as a living statue while living there, and my most common pitch – one of the best ones in the Quarter – was on Decatur Street in Jackson Square Park, directly across from Cafe’ du Monde.
I have many funny, sad, & beautiful stories from those months, one being a NOPD officer who had grown kind-of friendly with me in passing, and one day, as a group of about 15 tourists stood around me gawking & ignoring my tip box, I hear, seemingly over a PA system: “Put. Some Money. In The Box!” – and turned just enough to see him sitting in his car, smiling at me. I almost laughed at how quickly they reached deep into their wallets & pocketbooks, but couldn’t break character.
Another day there was the child being dragged along by his mother like a piece of old luggage, on her way to the next tourist shopping destination. She had him by the wrist, his arm stretched as far as it would go as he tried to look around at the people, the horses & carriages, and all the things that a young boy should be able to take the time to explore, to wonder about & ask endless questions to an annoyed parent.
As they were walking by me, the mother didn’t look twice in her one-person shopping stampede – she had the blinders of a well-oiled consumer, but the *boy*… the boy, he noticed that maybe something just wasn’t entirely right with that statue, with it’s white skirt gently luffing in the breeze, scuffed shoes… there was something that caught his eye, and as he looked up at my face, I caught his with mine – and I winked at him. It was something small – I just wanted him to know that *I* saw him. That he had a friend.

His jaw dropped and eyes popped open to near the point of being nothing but a caricature of a lazily carved pumpkin, and as he realized his feet needed to keep moving due to the ignorant machine of the relentless force dragging him along, he jogged to catch up & ran a little ahead so she might see him, remember he was there and listen as he said with the hope of her hearing him – “Mom – there’s someone *IN* there!”

A couple people in the series are street musicians, and as the camera switched to the other person, I saw that they were standing exactly where I did, and according to the show, exactly where I would be just a little over a month later.

This time, my eyes weren’t deep enough to keep the tears from falling.

Images of an Exquisite Life